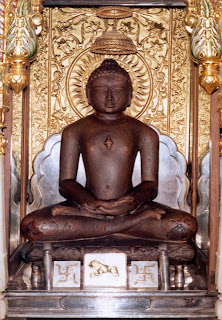 If we talk about the teachings and philosophy of Mahavir's we will see that it is the spiritual power and moral grandeur of his teachings, which impressed the masses.

He made religion simple and natural, free from elaborate ritual complexities. His teachings reflected the popular impulse towards internal beauty and harmony of the soul.

He did not believed in grandeur and elaborate rituals. According to Mahavir, attachment to material objects is the primary cause of bondage and is also the cause for greed and jealousy. Jainism denies the existence of God as the creator, sustainer, and the moral governor of the world. According to the Jain dharma, the goal of life is to attain liberation.

The Jain scripture, Jain Agamas Siddhantas, preaches the doctrine of Ahimsa or non-violence. According to this doctrine, all objects have a soul, and should not be hurt or killed. His main teachings involves that it was the greatest sin to cause injury to creatures, and that it was the greatest virtue to renounce worldly possessions and practice strict asceticism.

Mahavir was quite successful in eradicating from human intellect the conception of God as creator, protector, and destroyer. He also denounced the worship of gods and goddesses as a means of salvation. He taught the idea of supremacy of human life and stressed the importance of the positive attitude of life.

Lord Mahavir also preached the gospel of universal love, emphasizing that all living beings, irrespective of their size, shape, and form how spiritually developed or under-developed, are equal and we should love and respect them.

Every day Jains bow their heads and say their universal prayer, the Navkar-mantra. All good work and events start with this prayer of salutation and worship.

Posted by skashliwal at 8:57 AM